Frustrations Build for Campus Sexual Assault Victims, Including at ND 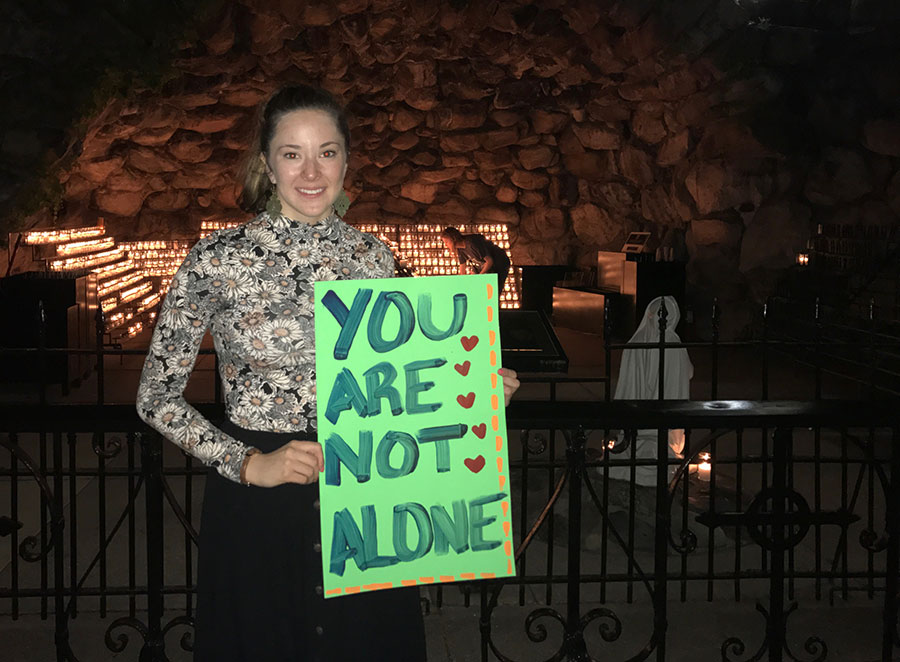 Emma Erwin, a sophomore at Notre Dame, holds up a sign at the Take Back the Night event a prayer service at the Grotto. (Photo/Adrianna Fazio)

Editor’s note: The names of the sexual assault victims’ names have been changed in accordance with guidelines from the Society of Professional Journalists Code of Ethics.

Sarah has been a victim of sexual assault several times throughout her past four years at Notre Dame. Looking back, she sees countless frustrations and internalizations with both the reporting process and her, now convicted, assailant’s treatment.

“People are hard on themselves here, there’s a lot of internalizing of blame and you don’t want to ruin someone’s career,” she said. “That was my biggest drawback. As much as he screwed me over and ruined me in a lot of ways that I can’t get back…I don’t want him to not get a degree. If he gets dismissed, that’s it … he will not graduate with a degree from Notre Dame.”

Sarah is not alone.

Notre Dame has a public and ongoing conversation about sexual assault since the 2015 documentary “The Hunting Ground” highlighted the story of Lizzy Seeburg, a Saint Mary’s student who took her own life a few days after filing a sexual assault report against a Notre Dame football player.

Notre Dame’s issues are part of a national trend on college campuses. According to the Rape, Abuse and Incest National Network, 23.1 percent of female and 5.4 percent of male undergraduate students nationwide experience rape or sexual assault through physical force, violence or incapacitation.

NDSP sends out crime alert emails when the Title IX coordinator receives a report of sexual assault on campus. In 2016 and 2017, only four sexual assault-related crime alerts were sent to students, a number that has decreased since 2015.

In the Campus Climate Survey, 90 percent of those who reported having experienced non-consensual sexual assault in the last 12 months said that they did not report the incident. Reasons for not reporting ranged from a lack of faith in the outcomes of reporting to blaming oneself for the incident.

Heather Ryan, Deputy Title IX Coordinator of Notre Dame, oversees student processes and has a role in administrative investigations and facilitating resources for students reporting. In order to increase reporting, Ryan said the university is trying to improve education about the process and increase agency of the survivor.

“Some of the things we’re trying to do is create spaces where they know about options available… before they have to come in and make a decision,” Ryan said.

“We want to give a complainant agency and help them make choices…..help them understand all the options in every space that we can,” Ryan said. 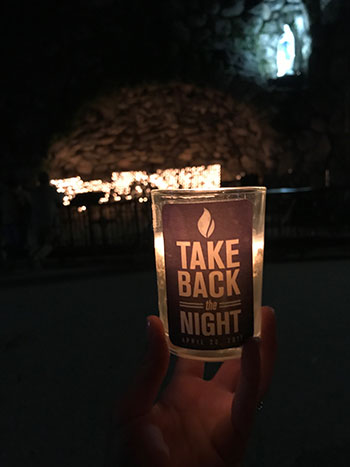 However, despite the increased education and awareness, there is a mistrust of the system. Sarah, who recently underwent the Administrative Hearing Process, was urged by friends to not report due to their bad experiences with the system. Sarah ultimately chose to report after hearing of other girls who had been harmed by the same perpetrator, but felt that her assailant did not take the hearing seriously because he wasn’t afraid of consequences.

Based on conversations with students who don’t know anyone personally affected by sexual assault at Notre Dame, many students see the numbers or crime alerts and still don’t fully understand the weight of the issue.

Amelia (whose name has also been changed) is a survivor who was assaulted by a friend of a friend visiting campus.

“Now that it has happened I can see how it could happen to anyone,” she said. “The statistics aren’t accurate because not everyone wants to talk about it…it’s an epidemic I would say.”

The primary movement to combat sexual assault on campus is greeNDot – “violence prevention strategy predicated on the belief that individual safety is a community responsibility and not just that of the victim or perpetrator” (Notre Dame Title IX).

Sarah said, “GreeNDot has become this huge thing that didn’t exist when I got here. But even with that, the culture isn’t changing — it’s not changed — which is really awkward because people will say they’re greeNDot certified… and still rape people.”

On April 20, approximately 100 students and faculty marched from Holy Cross College to Saint Mary’s College, through the Notre Dame campus, and ended at the Grotto to stand in solidarity with all those affected by sexual assault and harassment. The event was part of the international movement, Take Back the Night.

Connie Adams, head of the Belles Against Violence Organization at Saint Mary’s, said, “Take Back the Night is an opportunity to gather together as one. It is only in unity that we will be able to work together to find a solution to end violence and abuse.”

Professor Pamela Butler of the University of Notre Dame, however, had a different take on the issue. Although she sees the value in having professional and institutionalized responses to rape culture, she believes that the most profound movements come directly from student-led movements.

“Students need to make their own voices heard,” she said.

“I’m most concerned with are the professionalization of sexual assault advocacy and response on college campus what we’ve lost with that. I think we’ve gained things, but we’ve lost some things…the centrality of students’ voices to this entire process.”

360-degree image: Google Streetview image of the Take Back the Night vigil at Notre Dame.

As an additional strategy to combat sexual assault, campus leaders are currently discussing the use of the new app, Callisto. The app’s novelty is rooted in three main elements:

Notre Dame has not officially decided to utilize Callisto on campus, but the conversation is currently in the works, officials said. 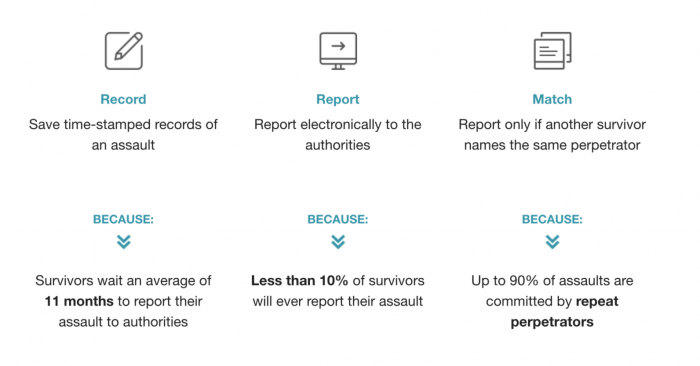 According to the 2016 Campus Climate survey,  91 percent of students agree (68 percent) or somewhat agree (23 percent) that they are aware of strategies to intervene if a situation had the potential for sexual assault. This is a 10 percent increase from the 2015 campus climate survey, an improvement as far as education and awareness about sexual assault.

“I think the more we can get students to be a part of the discussion…that’s how we are going to minimize this, because students are a part of that,” Ryan said. “It’s how do we create space where this isn’t OK.

“I can see it shifting, but it’s not where any of us want it to be.”