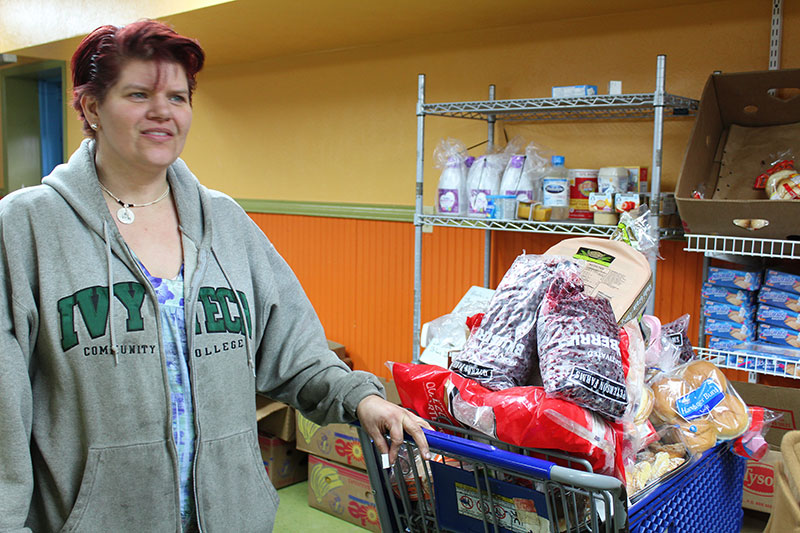 Jennifer Lundy collects food for her mother and her family. Lundy is a former volunteer at the Food Bank of Northern Indiana. (Photo/Caelin Miltko)

Jennifer Lundy, a South Bend resident, rolled her cart up to the counter at the Food Bank of Northern Indiana. The cart was filled to the brim with produce and non-perishables to be taken home to her three daughters, her niece and nephew and her mother.


Her mother had just had shoulder surgery and was unable to work. Lundy said that getting from the local food bank helps her mother out a great deal.“I watched a lot of people come through here,” said Lundy, who used to volunteer at the food bank, “and you don’t realize the demand for these places.”

In Indiana, the average food insecurity rate between 2013 and 2015 was 14.84 percent, according the United States Department of Agriculture. This was more than a full percentage point higher than the national average in the same time period.

Households ranked as having low or very low food security, as defined by the USDA, were included in those numbers. Across Indiana counties, the food insecurity rate varies widely. According to Feeding America, in 2014, the lowest county food insecurity rate in Indiana was 9.4 percent in Hamilton County, just north of Indianapolis. The highest was 19.4 percent in Marion County, where Indianapolis is located.

St. Joseph County, where the Food Bank of Northern Indiana is located, had a food insecurity rate of 16 percent.

Shane Turner, a South Bend resident, recently began volunteering at the food bank. He was exposed to the facility by his girlfriend, who used to work there. Turner decided he wanted to use his time to help make a difference in his community.

“It’s just an awesome place,” he said. “It helps out the community, really makes it a happier community.”

The pantry area where clients pick out their items is just a small part of the facility–a large storage area, complete with freezers and huge bins for sorting goods, extends beyond the pantry. The food bank currently has eight volunteers and two full-time staff, and the volunteers logged almost 50,000 hours last year in order to serve thousands of clients, according to Jaime Owen, an agency relations manager. 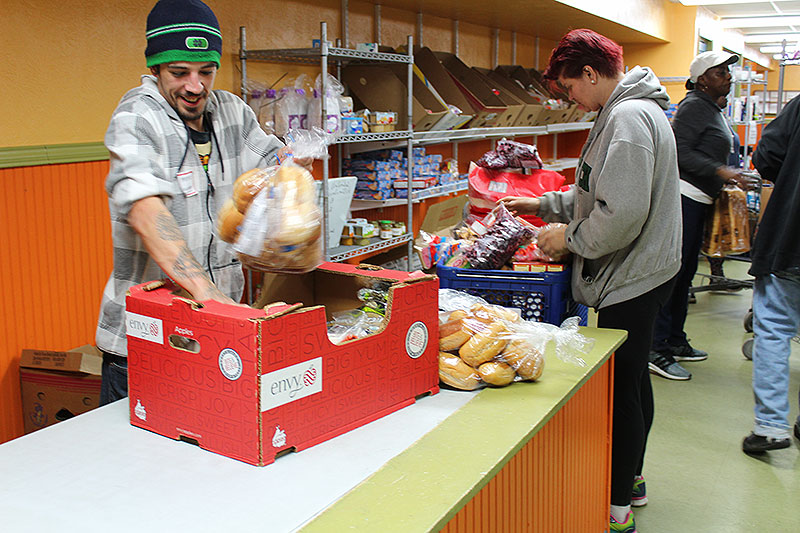 Turner said he hopes to be hired as a full-time staff and become more involved with the food bank.

“I just wanted to come here and do something,” he said. His current duties involve packing food, clearing freezers and loading and unloading deliveries.

Food insecurity is only one statistical way of measuring hunger in a given area. The USDA defines low food security as “reports of reduced quality, variety, or desirability of diet. Little or no indication of reduced food intake.” Very low food security is when there are “reports of multiple indications of disrupted eating patterns and reduced food intake.”

Gundersen said SNAP is “far and away the best way to address food insecurity. First, it would be great if we could get more people onto the program, either by making sure that those who are eligible participate and also by expanding eligibility criteria higher in the income spectrum, so more people would be eligible for the program. And another thing that would be great is to increase benefit levels.”

In Indiana, according to the USDA, 73 percent of eligible participants used SNAP in 2010. In 2014, 13.5 percent of Indiana’s population participated in SNAP and the number of participants increased by 2.53 percent from 2009 to 2014.

Another way of tracking hunger is through the concept of “food deserts,” which examines access to food by comparing the locations of the closest grocery stores, the income levels of the inhabitants and whether people have access to a vehicle.

“Whenever I think about food deserts, usually it’s not a big issue, but on an individual level it could be,” Gundersen said.

Owen said, “Most people are surprised by how great the need is. There is a stereotype of unwed mothers with 75 children and no education, but about half of our clients are under 18 or over the age of 60. That’s sad. No one should have to go hungry.”

The Food Bank of Northern Indiana is a member agency of Feeding Indiana’s Hungry, and it works with about 200-member agencies–more than half of which are food pantries. The others are soup kitchens, shelters and other food services for low-income people.

Owen said the Food Bank of Northern Indiana encourages all of their pantries to be client choice, meaning they mimic grocery stores in their set up. Unlike the traditional food pantry, which prepacks boxes for clients, at a client choice pantry, users are given a set number of each type of item that they may take (carbs, veggies, hygiene products, meat, etc.) based on the number of people in their household. Then they use a shopping cart to collect their food and “check out” with a volunteer.

“Some of the stories are just tragic,” Owen said. “There are so many senior citizens who for some reason are now raising their grandchildren, or who have had something happen to other family members.”

Aside from their home pantry in St. Joseph County, the Food Bank of Northern Indiana works with several counties in the area with several different programs, including a “Food for Kids” backpack program and a mobile pantry, which travels to rural Stark County once a month.

“If we knew the answer [to solving food insecurity], we wouldn’t need food banks and food pantries,” Owen said.