In her late teenage years and during her sophomore and junior years at Notre Dame, Morgan Monte struggled with depression and suicidal thoughts, the same issues that she helps others combat today through her work.

“It was in my mind all the time, like thoughts of being worthless. Everything I did, my mind would find a way to tell me that I screwed up somehow,” Monte said.

“Part of how the depression manifested was doing risky things like riding my bike along the side of the road in the dark, like a passive death wish.”

Monte’s depression materialized in her high school years at Frankenmuth High School in the form of eating disorders. What started with eating too little and exercising too much reversed into eating too much. This then progressed to acts of self-harm and suicidal thoughts. Monte could not handle her emotions, she said, and sought to shut them down.

The onset of Monte’s depression mirrors those of other teens — and her story is a common one.

But in terms of teen suicide rates, Indiana ranks much higher in comparison to other states.

This issue especially hit close to home in Indiana. According to the 2015 Indiana Youth Institute Kids Count Data Book, the state was third out of 37 ranked states for the percentage of teens who considered attempting suicide. Indiana was second out of 34 ranked states for teens who say they made a suicide plan.

Additionally, the percentage of Indiana female teens nearly doubles the percent of male teens in these four categories:

The Oaklawn Psychiatric Center partners with South Bend Community Schools to administer STAND (Students Taking a New Direction) assistance programming that focuses on the prevention of drug and alcohol use. Additionally, the community department of Memorial Hospital of South Bend received a grant in 2017 from the Norma Frank Estate that will go to provide QPR (Question, Persuade, and Refer) training. This training is designed to teach anybody how to respond to people who may be contemplating suicide. Rebecca Zakowski, a pediatric health project specialist from Memorial Hospital, stated in an interview:

“It [QPR] encourages people not to be afraid to ask people about suicide.”

According to Zakowski, Memorial Hospital is partnering with South Bend Community Schools and will begin providing QPR training to teachers and licensed school staff throughout the 2017-2018 school year.

Riley High School takes additional steps to address teen suicide. Suicide prevention programming is provided yearly in their health classes. They teach the signs of suicide as well as what to do if a friend or family member is suicidal.

According to Mary Dunn, a social worker from the high school, “These efforts have paid off many times over.  Several suicidal students were brought to me by their peers.  We take suicide very seriously at Riley and pray that our students trust us enough to let us help them through difficult times.”

At the University of Notre Dame, steps are being taken to promote suicide prevention. 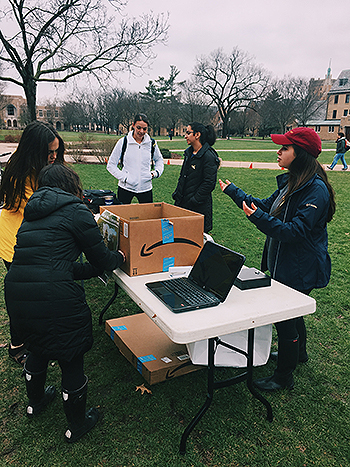 Howard Hall, a women’s dormitory, hosted an event called “Walk for More Tomorrows” on the South Quad of Notre Dame’s campus on March 30. The goal of the event was to raise awareness, support and prevention regarding teen suicide. Participants in the event were asked to donate $2 to the Suicide Prevention Center of South Bend and then walk around a track twice. As participants walked around the track, they read yard signs that included other statistics regarding suicide.

Phoebe Natale, Notre Dame junior and Vice President of Howard Hall, said, “When I first became Vice President of Howard, I knew that I wanted to make a focus of mental health during my time in office. Suicide has been in my life since the age of 12 up until as recent as this past Monday. Howard exec and I recognized that mental health and suicide are extremely prevalent on our campus, though sometimes the awareness isn’t there. Maybe it’s because people don’t want to talk about it for fear of stigma; maybe they simply don’t know how.”

The event prompted discussion on campus.

“After people took the time to listen to what I had to say and what other girls had to say, gather materials and take their walk around the track,” Natale said. “A lot of them came out a little bit less excited than when they first entered. Which, to me, as morbid as it sounds, tells me that it had an impact. Hopefully they’ll be thinking of this going forward and will be able to step in if they see that something is up with a friend or a family member.”

Another piece of positive feedback came from Monte, who posted in the Facebook event page:

The way teens talk about suicide has an impact.

“How do we talk about it? I think generally in very hushed tones,” said Mary Mecca, a Notre Dame senior and campus advocate for suicide prevention, in an interview.\

Teens sometimes attempt to understand suicide through logical reasoning. “They’re looking for answers that would make logical sense to an individual who is not suffering from mental illness,” Mecca states. “But unfortunately, 90 percent of individuals that do decide to kill themselves are mentally ill.”

However, people cannot attest suicide to mental health and leave it at that, Mecca adds.

For depressed teens, it may be cliché, but it is important to know that it gets better, said Monte.

Monte has come a long way. Through medication, dialectical behavior therapy and a getting a dog, she is now helping others undergoing similar situations by sharing her story and co-facilitating support groups. She said that supporting others helps her see how far she has come over the years.

“I want to stress that I am happy now, maybe not optimally, but I experience joy frequently as a contrast to being in that dark place,” she said. “So I guess if a teen was struggling, I would encourage them to reach out and get help. When I’m alone with my thoughts, they spiral and amplify — ­­ when I talk to someone, they calm and have less power over me.”

If you or someone you know is struggling with suicidal ideation, contact the National Suicide Prevention Lifeline at 1-800-273-8255.