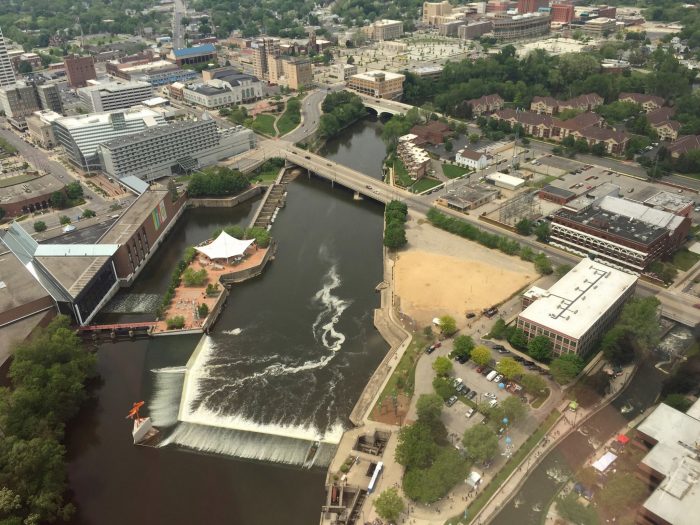 A view of downtown South Bend above the St. Joseph’s River. (Photo/Wikimedia Commons)

At the end of 2016, Mary Grace Sikorski was forced to close her restaurant, Spaghetti Joes on the west side of South Bend due to lack of business. A few months before Sikorski closed shop, Stephanie Mirza and her husband bought the Innisfree Bed and Breakfast just south of Spaghetti Joe’s and have seen massive success since taking over this past August.

Sikorski and Mirza’s business ventures reflect the mixed bag of economic development in South Bend under then-Governor, now Vice President Mike Pence, and Mayor Pete Buttigieg since the two were elected in 2013 and 2012, respectively.

The South Bend area, specifically, has been influenced by two major players outside of Pence and Buttigieg, whose roles in the economy weigh heavily into the region’s economic development.

“The Chamber of Commerce, they are working really hard to make South Bend a place for people to come and the visit South Bend people,” Mirza said. “There are just so many initiatives going on. And of course there is the university. Notre Dame has an orbit itself that brings people here, so there are kind of these two operating things that are more and more interacting together.”

This divergence in unemployment numbers, in which the state level is 0.7 percentage points below the city level, is representative of a greater trend across economic measures. The median income in of those living in St. Joseph’s County ($45,248) lags behind the state average of $50,532.

Dan Graff, a history professor at Notre Dame, attributes this discrepancy to the loss of industrial jobs in the area.

“You don’t talk to South Bend residents for very long and ask them about the economy and they don’t still bring up Studebaker,” he said. “ … [The plant] closed in the 60s and people are still talking about it. So it has been somewhat of a long-term problem. I think there’s been periods of hemorrhaging of industrial jobs in the wake of NAFTA in 1994.”

This departure of the core of the economic sector led South Bend’s population to decline from its peak in 1960 of 132,445 to around 100,000 in 2010. This number, according to census estimates, has begun to rebound in recent years.

For Sikorski, the decision to pursue a lifelong dream of opening Spaghetti Joes was the result of a perfect blend of timing and desire.

“I was fed up with corporate America,” she said via an email interview. “After 15 years at my job, my position was eliminated. The same thing had happened after my first job out of college — I was at that one for 12 years. So I wanted to work for myself.  I also loved to cook and always had a dream of opening an Italian restaurant, so the time seemed right.”

Sikorski determined the name for her restaurant per Italian naming customs. When many members of a family have the same name — stemming from their being named after their own fathers or grandfathers — then the identifying characteristic becomes the skill around which the individual built his livelihood. With five “Joes” in the family, and Sikorski’s grandfather being known as such among his family for his passion for cooking Italian cuisine, the choice was simple for the new establishment’s name.

The fairytale of owning the family restaurant did not last long. After only eight months of operation, Sikorski was forced to close the restaurant, citing a lack of business rooted in low demand.

“The area was terrible for a restaurant,” she said.  “I should’ve done more research before deciding on the location, but it was literally two minutes from my home.” 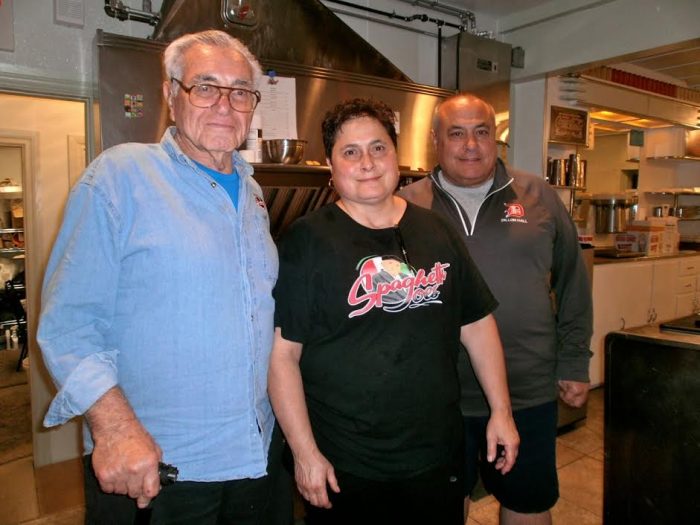 “I ended up going back to work for ‘the man,’ and it was far too taxing to keep up both the full-time job — which at this point was paying the bills — and running the restaurant,” she said. “Even with business at the restaurant declining, it was more than I could handle long term.”

Sikorski’s failure can be attributed, in some part, to the loss of South Bend’s industrial economic base. When Studebaker left South Bend in 1963, the rug was pulled out from under the city, who has still yet to recover completely after more than a half-century of stagnation.

This stagnation has made it harder for small business owners like Sikorski to succeed with less money flowing in and out of the city. In turn, Graff said, resources are restricted, and the number of jobs paying people a just wage and keeping them safely out of poverty has continually fallen since the early 1960s.

“(South Bend) used to have a much more significant industrial base, [but] the jobs that have disappeared or have moved away have not been replaced by jobs that pay the same,” he said.

The lack of economic success in the area was reflective of a larger nationwide trend which has shrunk the American middle class, Graff said.

“I refer to this nationally as a chronic crisis that we’ve been dealing with, the disappearance of stable long-term middle-class jobs for 40 or 50 years now,” he said. “You usually think of a ‘crisis’ as something momentary or a short period, and it’s chronic in the sense that it’s an ongoing thing. It long predates the Pence administration, and it’s bigger than Indiana too.”

When Stephanie Mirza and her husband moved back to South Bend in 2016, they decided to take a leap and decided to purchase a unique home which doubled as a bed and breakfast.

“When [my husband] found out [he] had a position [at Notre Dame] to come back to … we looked at housing and he saw this place, he’s like this is amazing,” she said. “How often do you have the opportunity to not only buy a house but buy a historic home that’s also a bed and breakfast? We met the previous owner, asked her all sorts of questions like, ‘What in the world are we doing?’ She said it’s not that bad, it’s a lot of fun so we went for it and it’s worked out.”

Since purchasing the Innisfree — an Irish-themed bed and breakfast adorned with Gaelic symbols and with rooms named after famous figures in Irish history — the Mirzas have seen booming business, something Stephanie attributed, in part, to a revitalized South Bend.

“South Bend, since we left five or six years ago, has changed a lot. We left when it was at a low point and we come back and see life and interest and attention coming to this area which is good for us, good for our business,” she said. “The river lights [are] a beautiful addition, the Four Winds [Field], that’s a big deal. I think we’re going to see a lot more business because of that.” 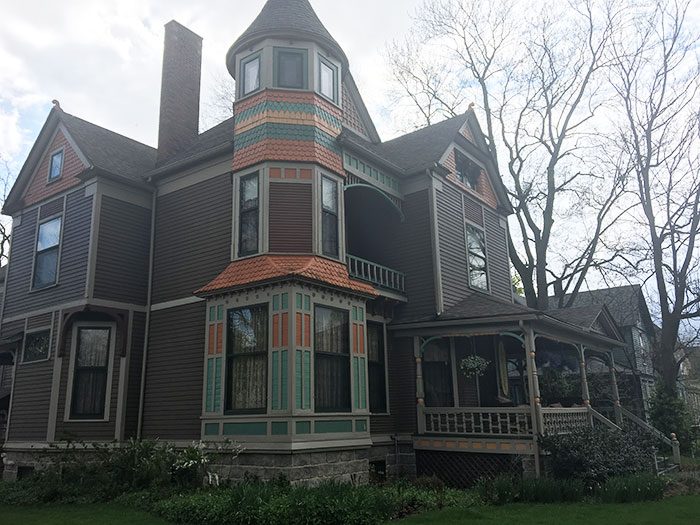 The Innisfree Bed and Breakfast, on the west side of South Bend, was purchased in mid 2016 by Stephanie Mirza and her husband. The inn has seen success since the in the months since it came under new ownership. (Photo/Lucas Masin-Moyer)

Mirza’s success, and that of other small businesses in the region, has been helped by city-level initiatives spearheaded by the Chamber of Commerce and Mayor Pete Buttigieg. These initiatives, Mirza said, were aimed at improving the outward appeal of business, thereby helping them to grow income.

“The city has initiatives for small business,” she said. “If you want to improve the outside of your business and you’re within this radius of downtown, you can get grants to do that. I applied for one to work on the exterior part, it can’t be just for maintenance it has to be some new signage or some new … improve the look on the street.

Overall, Mirza said operating a business in South Bend has been a positive and successful experience.

“It’s been great,” she said. “We just moved from Berkeley, California, so it’s kind of a major shift as far as cultural and things like that. But the environment here has been really receptive and positive. People really genuinely want to help out.”

For the first time since 1988, Pennsylvania donned Republican red in the 2016 election.

The state had long considered a Democratic stronghold based on its large cities and substantial working-class population. In 2016, Pennsylvania was one of the crucial states, along with Michigan and Wisconsin, in electing Donald Trump as the 45th President of the United States.

While most regions voted more heavily Republican, the region which saw the greatest swing away from the Democratic Party toward Trump was the Northeastern region. In Lackawanna County, home to Scranton, Trump won 11 percent more of the vote than Mitt Romney did in 2012 and in Schuylkill County, just south of Lackawanna, Trump brought home 14 percent more of the vote.

Northeastern Pennsylvania had long been home to the coal mining and steel industries. When these industries left, with increasing globalization, it created a large class of unemployed, and largely white, working class voters 一 the demographic that was key to Trump’s election.

These voters had long voted Democratic 一  based on strong union ties 一 but Trump’s economic populist message, based on the idea that “horrible” trade deals, such as NAFTA, were taking away industrial jobs, swayed many of these voters to switch their party allegiance.

Trump’s success in Pennsylvania spilled over into other elections, most notably the senate race where Pat Toomey was narrowly reelected over Katie McGinty, a former environmental advisor to President Bill Clinton and Secretary of the Pennsylvania Environmental Protection Agency.

On Jan. 27, Washington, D.C., saw its third major event of the past week as people gathered for the 43rd annual March for Life to protest abortion.

But less than a week earlier, on Jan. 21, some 500,000 people gathered in the same place — and at locations all over the country — for the first annual Women’s March to protest for the protection of a woman’s right to choose, among other things.

While the Women’s March was not centered on abortion, it did take a stance in favor of abortion rights. The Women’s March released a policy document stating that the march supported “open access to safe, legal, affordable abortion and birth control for all people.” One day after the inauguration of Donald Trump, it drew massive crowds not only to the nation’s capital but also to cities around the world.

In addition, the Women’s March showed continued interest in the days following the protest. Since it was the first of its kind, it most likely drew questions about its crowd size, platform and mission. Also happening to fall on President Trump’s first day in office, it was a rally against his past statements and actions that many deemed misogynistic and reprehensible.

On the other hand, in its 43rd year, the March for Life has become a more established, well-known protest with imaginably fewer questions surrounding its premise. This year, however, Vice President Mike Pence became the first vice president to speak at the rally.

While the Women’s March did take a pro-abortion stance, its platform included a wide range of social issues, such as immigration reform, healthcare reform and LGBTQ rights, that provided pro-life men and women a chance to rally for other issues.

Here’s how the topics fared in Indiana on Google search:

If Google searches are any indication, it’s no surprise that Indiana Governor Mike Pence is headed to Washington, D.C., as vice president.

Pence easily outdistanced Democratic VP candidate Tim Kaine in Google searches over the past year, both nationally and in Indiana, according to analysis of Google search data.

The charts below illustrate a “normalization” of searches for Pence, which peaked last summer with his selection by Donald Trump as running mate. He also saw considerable peaks during the VP debate and, of course, Election Day and its aftermath.

Google Searches for Mike Pence and Tim Kaine in the U.S. (past year)

Google Searches for Donald Trump and Hillary Clinton in the U.S. (past year)